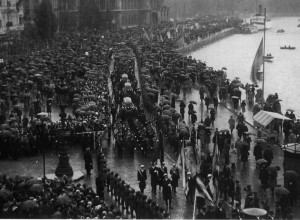 THE COFFINS OF SALOMON ANDREE AND COMPANIONS, Stookholm, October 5, 1930 (Wikipedia).

The Andree expedition, 1897, tried to fly a balloon over the North Pole, ignoring millions of pin-prick leaks in the silk fabric and the total lack of human knowledge about Arctic wind-patterns.The flight, whose cargo Included 20 kilos of chocolate cake, lasted about 52 hours. Andree and his two companions then dragged a boat over the pack-ice for 3 months, living mostly on polar-bear meat, ending on the tiny island of Kvitoya, where they shortly died. Their last camp was discovered by a Norwegian expedition in 1930. Almost all of Andree’s diary (English translation in Andree’s Story, 1931) and some undeveloped film survived: see the photo at left. The balloon was called ørne, “eagle”.

1 & 2 focus on the Old & Rare releases; the third is an indepth interview with the gifted Hubert Germain-Robin.

Mezcalero no. 11 has arrived, from Alberto Ortiz (“Don Beto”) of Bramaderos. The semi-wild agaves are Madrecuishe (nice touch of acerbity) and Mexicano (dobadán, floral/spicy). Don Beto’s destileria is the tidiest I have seen, and this mezcal is very cleanly made.

Alipus San Baltazar is no longer being exported to the USA.

A couple of pricing notes: the Germain-Robin Old Havana has gone to $120, reflecting the use of older brandies in the solera; there are minor price increases in Los Nahuales and Alipus due to increased agave prices in Oaxaca.