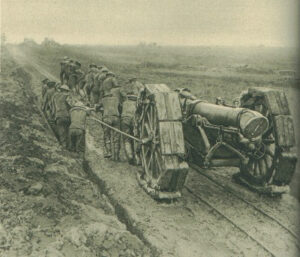 Near the Somme during WWI (firedirectioncenter.blogspot.com).

An estimated 8.5 million men died in combat during the war; many more were wounded. 90% (!) of the men mobilized by Austro-Hungary were casualties or prisoners of war, aggregating 7 million. The large numbers were due largely to the disparity between technological development in weaponry, such as the machine gun and large scale use of heavy artillery, and military tactics, and also to deaths from infectious disease.

The artillery piece on the cover is being dragged along a railroad right-of-way, a more solid roadbed. Note the trench in which the men struggle, excavated for the purpose (soil thrown up to the left) to provide better traction. The clumsy blocks attached to the wheels were a form of the “dreadnaught” wheel, patented by James Boydell in 1846 (2nd photo) and used on horse-drawn wagons in the Crimean War.

Civil War general William T Sherman uttered the famous words “War is Hell” addressing the graduating class of a military academy in 1879. He is reported to have wept as he spoke them.

Lots of goodies this month The DSP CA 162 Cranberry vodka is 100 cases only of a seasonal item that took us better than a year to develop. It’s Clear Creek’s cranberry liqueur (from Oregon fruit) blended into the Buddha’s Hand citron. Devin Cain thought it up and did the developmental work.It’s is worth buying: $38. Here’s me talking about the process:

Mezcalero no. 14 is here: spicy intensity of wild & semi-wild arroqueno softened by distillation in a clay pot-still, from Jesus Rios from the tiny pueblo of Potrero. I regret that the rapid rise in the price of agaves forced us to raise the price to $96, still a very good deal for the quality.

Don Sutcliffe’s The Exceptional has released an extraordinary blended malt, assembled with the help of Willie Phillips, who ran Macallan before it was bought out. The components include a 30-year-old Macallan; it was finished in first-fill Oloroso casks. Amazing quality for the price. $110.

The Old & Rare Barrel 154 is a truly spectacular brandy. We distilled it in 1985 (30 years ago!) from old-vine chenin blanc harvested from the terraced Wegner vineyards, south of Ukiah. Left in the barrel was less than half of what we put into it: evaporative loss, which has deepened and concentrated the flavor and aroma to a beautifully intense focus – yet it’s still soft. This belongs among the best distilled spirits on planet Earth. 120 bottles only. $600.

Crispin Cain has just bottled two wonderful whiskies. The Low Gap 4-year-old Wheat, from 2010/11, aged in three kinds of oak, displays a soft wheat mouthfeel with a surprising maturity: $75. The Low Gap Bourbon, aged entirely in new bourbon barrels, is astonishing. Almost all bourbon I have tasted is somewhat rough on the finish and overly oaked. Crispin’s is a model of what whiskey should be, flavorful and appealing. Three early tasters told me it was the best they had ever experienced.

Check out Just Passing Through.